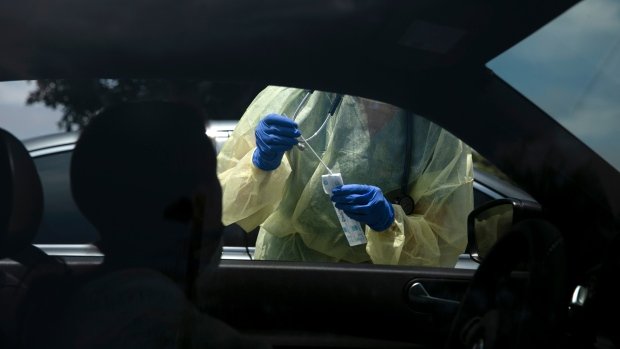 SACRAMENTO, CALIF. —
California health officials reported the state’s first coronavirus death of a child on Friday as the statewide tally of fatalities surpassed 9,000, saying the victim was a teenager who had other health conditions.

The teenager’s death occurred in the Central Valley, but officials at the state Department of Public Health released no other details, citing privacy rules. The Central Valley is the state’s major agricultural region and recently has become one of California’s hot spots for the virus.

It’s extremely rare for children to die of the coronavirus. As of mid-July, the Centers for Disease Control and Prevention said 228 children had died of the disease in the U.S., less than 0.2% of the nation’s deaths at the time.

In California, more than 9,000 people have now died from the virus, and three-quarters were 65 and older. Only about 9% of California’s nearly half-million confirmed virus cases are children, and very few have suffered conditions serious enough for hospitalization, according to state data.

Scientists still aren’t certain why children don’t seem to be as seriously affected by the virus as adults.

In March, Los Angeles County officials said a 17-year-old boy died of the virus. At the time it was believed to be the first death of a child, but days later local health officials walked back the initial finding, saying it was possible he died from something else. County health officials said the case would need to be evaluated by the Centers for Disease Control.

Rex Parris, the mayor of Lancaster, said the boy from his city died from septic shock after being admitted to the hospital with respiratory issues.

How likely children are to contract and spread the virus is a key question as leaders in California and elsewhere determine if and how to safely reopen schools this fall. Most California counties are now on a state monitoring list because of rising virus cases and and may not reopen schools for in-person instruction until they are off the list for 14 days.

Statewide, 96 deaths were reported in the last day, according to figures released Friday. Cases are still increasing by the thousands each day, but the curve appears to be flattening. The average number of new cases per day over the past week was 8,322, compared to 9,881 in the previous week.

The average percentage of people testing positive dropped to 6.5% over the past seven days, compared to 7.2% over 14 days.

Gov. Gavin Newsom pledged more support for the Central Valley on Monday, including $52 million in federal money for eight counties to improve testing and find places for people to isolate or quarantine if they can’t do so at home. The eight counties, including Fresno and Kern, home to major cities, had positive test rates between 11% and 18% at the beginning of the week.

For many people, the coronavirus causes no symptoms and for others only mild or moderate illness, such as fever and cough that clear up in two to three weeks. For some, especially older adults and people with existing health problems, the virus can cause more severe illness, including pneumonia, and be fatal.